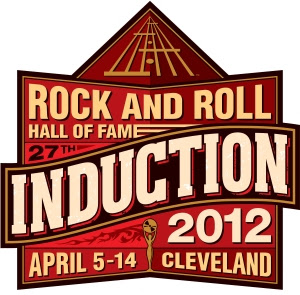 It's Rock and Roll Hall of Fame Induction week! Now, I love that the Rock Hall is in Cleveland and I love that the inductions are here this year. However, in the spirit of education, since many people don't know who's in and who isn't in, this blog is to give you an idea of who has been left out.  The goal isn't to harp on those that have repeatedly been overlooked (most notably - at least according to their fans - Rush and Kiss).  It's more to let you know some of the bigger acts that for some reason have not been deemed Hall of Fame worthy by the voting committee. I'll start with giving you a couple of sources that have made strong cases for those that have been ignored.  Then, list a few (not all) bands that have been glaringly overlooked.  Finally, I'll leave it up to you to leave your comments on who you want to see in...Kiss and Rush fans, have a ball! 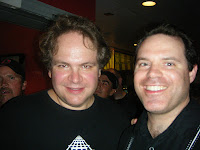 Nationally, one of the most vocal critics of the Rock Hall has been Eddie Trunk (pictured with me to the left).  To make his point, he's wearing the shirt shown below. He's made his case many times on his website, radio shows and on That Metal Show. While criticizing the Rock Hall (note: he's made sure to clarify that his criticisms is toward the New York board and voting committee and not the hard working Cleveland employees), his main goal is to get the information to people who simply don't know some bands are not yet inducted.  He's had Joel Peresman, the President and CEO of the Rock and Roll Hall of Fame Foundation, on his radio show to explain the nominating and voting process.  He also stated his case. At the end, they agreed to disagree, but the overall interview was very respectful on both sides and very well conducted.
Locally, Rocksnubs.com is a website and petition that was conceived by Patricia Kellogg (@patriciakellogg) and built by Greg Bellan (@gregbellan).  It list 40+ bands that have been overlooked and includes a petition you can sign with the hopes of convincing the Rock Hall to induct them.  Click below to check them out and sign the petition.

So, who's not in, exactly...here's a small sample:
So, that's just a small sample (for a fuller list, check out www.rocksnubs.com).  Peresman said that the #1 factor in the nomination process is how influential the artist is on other artists. Taking a look at the list above (and countless others), influence is not an issue with any of them.
Meanwhile, artists like Madonna, ABBA, Michael Jackson and other pop artists make it in. Sorry, but it's the ROCK AND ROLL Hall of Fame, not the Pop Music Hall of Fame. At the Rock Hall, they've even added a big explanation printed on a wall (next to a photo of Madonna) that basically disclaims why these non-rock artists have made it in.  In other words, it looks to me like Cleveland employees got tired of answering that question, so they just put it on the wall.
So, now it's your turn.  What are your thoughts?  Who are your overlooked artists? As usual, feel free to agree or disagree, but tell me what you think.  Thanks for reading and please sign up to be notified by email when my blog is updated.
Posted by Jeremy Bednarski at 11:24:00 PM