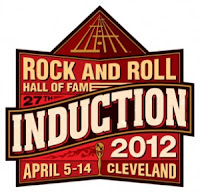 What?  Thank Axl?  What the hell for?  Well, it's simple really...he brought a ton of of attention to the induction ceremony.  Also, whether his intention was to screw them over or not, he left them enough time to come up with a Plan B. And, Plan B turned out pretty damn good.  Had Axl showed up, he wouldn't have played and would have caused so much confusion, no one would have played.  So, fans hoping to get Axl, Izzy, Duff, Slash and Adler...and Sorum, instead got Slash, Duff, Adler, Sorum with Gilby Clarke (originally from Cleveland!) and Myles Kennedy.  Not the classic lineup, but they sounded really good.  For those of you that don't know, Myles Kennedy is the singer for Alter Bridge and has been singing for Slash for his last tour and his upcoming album, so he has some familiarity with the GnR songs.  Now, he won't be confused for Axl Rose, and quite honestly, I sometimes find his voice a bit annoying, but he sounded great Saturday night.  The whole band sounded great. 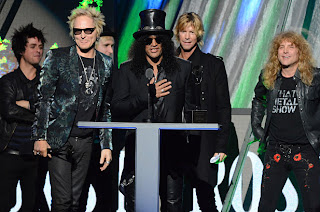 I didn't go to the induction ceremony...mainly because GnR was the only band I had any interest in seeing (and Ron Wood, of course...Cheers), and I never bought into them having an actual reunion.  Additionally, I'm very passionate about music and things tend to annoy me...lol.  For instance, I was pissed that they head Red Hot Chili Peppers close the show.  I understand why, given the Axl drama and all, but that was just ridiculous to me.  Guns 'n' Roses is the headliner. Period. The other thing that annoyed me...Kid Rock.  I just can't stand him.  He takes good songs and ruins them.  Ugh...Don't get me started. And I have to at least mention Bette Midler.  How is it that she's becoming an induction frequent guest?  She's very talented in many things, but she's NOT rock and roll in ANY way.  All of these things would have had me annoyed and would have kept me from enjoying myself.  I know...I have issues :P  Like me, if you didn't go, you can see an edited (for time) version of the Induction Ceremony on HBO on Saturday, May 5th. 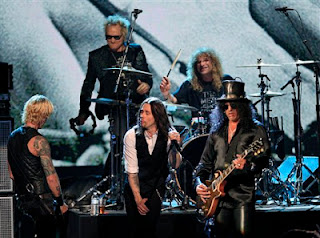 I'm glad to see that the inductions came off great and really put Cleveland in the spotlight again!  Great job, Cleveland! Great job, Rock Hall! Great job, Clevelanders! Can't wait until they come back in three years.  Although, in this article in the Plain Dealer, "Rock and Roll Hall of Fame inductions, done 'the Cleveland way,' are a hit", Mayor Jackson says that they wanted the inductions only every three years.  That's ridiculous! If he really said they didn't want it every year - and that could very well be their rationalization after the fact - then Jackson needs to be thrown out of office!
We'll see what happens with the next inductions in 2015 which will be the 30th Anniversary.  It has the potential to be a once in a lifetime event.  Here is a link to the Guns 'n' Roses performances of "Sweet Child 'o Mine".  It's from Youtube, so I can't guarantee it won't be removed by the time you click it.
What was your favorite (or least favorite) moment at the inductions?  Thanks for reading!
Posted by Jeremy Bednarski at 7:48:00 PM