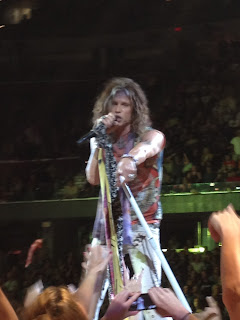 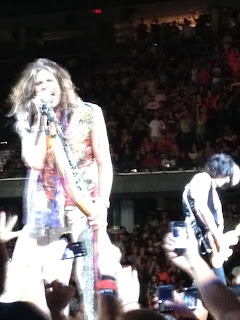 It's hard to believe it's been seven years since Aerosmith played Cleveland!  It's even harder to believe that the last time they were here, they couldn't even come close to selling out the CSU Wolstein Center. What a seven years it's been for the band...books, breakups, breakdowns, drugs, surgeries, rumors, backstabbing, speculation, bad blood, solo projects, reconciliations, American Idol (blah)...and I'm sure I'm missing a ton.  So, when I saw Cleveland was the second show of their Global Warming Tour, I was glad because early meant they hopefully wouldn't have any meltdowns before making it to our city! 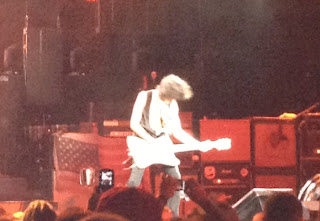 Now, I've mentioned before that I'm a huuuuge Aerosmith fan.  They're my favorite band (if I had to pick one and only one). And, they are without a doubt, the BEST live band. Bar none. All five original members...with a little help from Russ Irwin on backing vocals and keyboards. Even as they were fighting and not talking at all the last couple of tours, they still put on incredible live shows. But, to be honest, after the Steven Tyler/American Idol crap and the premiere of their new song, Legendary Child, I was a little nervous about what this concert would bring. Too much new stuff (I'm firmly in the old school camp)? Trying to bring along the AI crowd while alienating their "real" fans (there were quite a few pre-teen girls there...)? 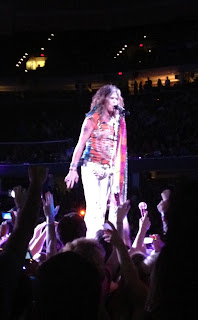 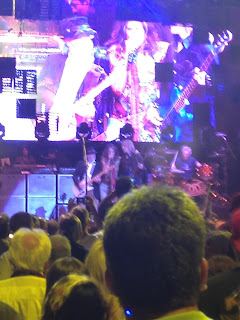 Well, all I can say is that Aerosmith is back and rocking just as well as they ever have. Steven Tyler and Joe Perry rose up onto their platform in the middle of the crowd to kick the concert with "Draw The Line" and set the tone for the entire night right there and then. From the first note, my faith in Aerosmith was restored. This is the Aerosmith that Cleveland has missed for seven years. Most notably, Steven Tyler commanded the spotlight and delivered incredibly...no American Idol residue! While he worked the runway platform, everyone had their moments to shine. I've seen them more than ten times, and this was right up there as one of their best concerts I've seen.


They played two new songs. First up was "Oh Yeah". Honestly, it was only the first time I (or probably anyone there) heard that song, but it is not a good song. There was absolutely nothing memorable about it. They later played "Legendary Child", again I'm not really digging that song (see my previous review of this song here). After, Tyler mentioned, "It grows on ya". I muttered to myself, "You're hoping it will...". 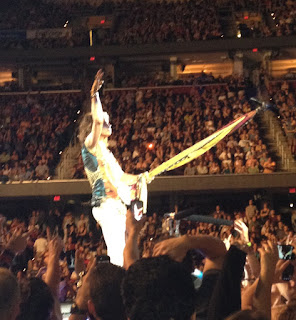 Anyway, back to the show...Luckily, they followed up "Oh Yeah" with "Walking the Dog". And then, three "new school" songs, "Livin' On The Edge", "Cryin'" and "Ragdoll".  Just as I was thinking it was starting to trend into too much new stuff, they kicked into three of their best "old school" songs. Brad Whitford took the spotlight on "Last Child". He is by far the most underrated guitarists out there. His playing on "Last Child" is always spot-on, bluesy and soulful. They quickly went into "S.O.S. (Too Bad)", again allowing Whitford to shine on the guitar solo. The biggest surprise was when Joe Perry took over lead vocal duties for "Combination", a seldom heard song off of Rocks.  He even pulled out "Boogie Man" as an intro.  I would have paid the $150 ticket price just to hear them play these three songs.  Throw in a little "Mama Kin" a little later and I was in Rock Heaven. 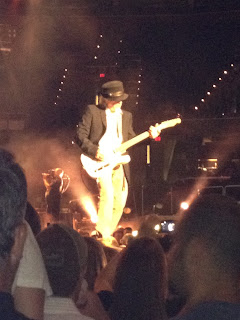 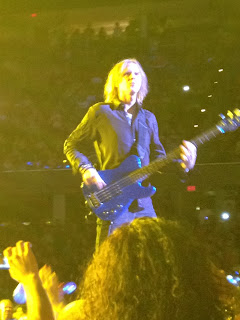 Of course, they hit the big ones, "Walk This Way", "Sweet Emotion" and "Dream On"...the latter opening the encore as Steven Tyler emerged on a baby grand piano at the end of the platform. "Train Kept a Rollin'" ended the night on an incredibly high note.  Overall, the mix of old vs. new was 10 songs to 8, so I'll take it.  The only other oddity was the use of two back up singers.  They added nothing to the show and were a waste.  Get rid of them and take $5 off the ticket price...lol. 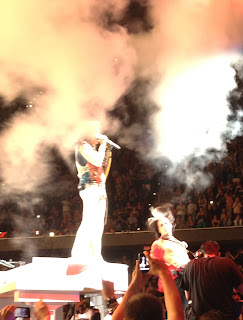 Overall, I can't say enough how great of a show it was and how much I hope it's not another seven years before they make their way back to Cleveland.  By the way, thank you, Cleveland for selling out the show (or coming damn close)! We showed them how hard Cleveland rocks! 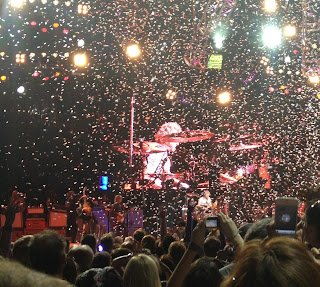 If anyone reading this was there (or saw them in another city), I'd love to hear your thoughts! As always, thanks for reading! If you like my blog, please sign up to follow it and get it in your email.  Feel free to share it with your friends!
Posted by Jeremy Bednarski at 7:45:00 PM