A Great Night in Cleveland: What's Not To Love! 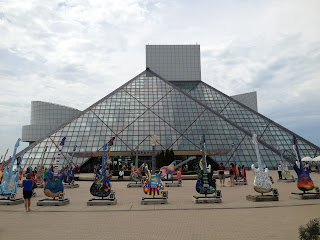 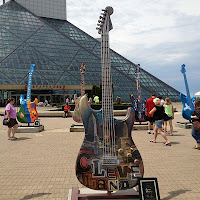 I have to admit one of the reasons I wanted to check out GuitarMania was to see the finished Cleveland.com guitar “True Grit” that was decorated, by artist Garrett Weider,  with Twitter handles from the last Tweet Up...including mine! (@jeremybednarski, by the way, in case you don’t follow me.) The guitar turned out beautiful. One of the best...and that’s saying a lot because there are some outstanding guitars.  My other favorites include “No Stone Left Unturned”, “Take Me Out to the Ballgame” (Cleveland Indians) and the Alice Cooper guitar that I don’t know the name of. 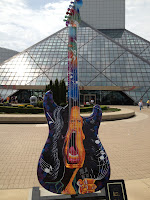 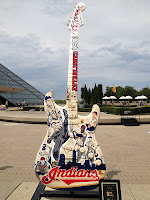 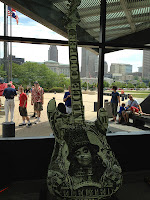 Then, it was on to Horseshoe Cleveland! Luckily there was no waiting to get in. The casino was incredibly well done! All the excitement of the slot machines and the cheers from lucky gamblers at the tables made us want to jump right in!  The dealers were very fun and interactive. What they lacked in speed (which will continue to improve), they made up for with personality and warmth.  The tables are a little expensive still (mostly $25 tables with a couple $15 tables), but my wife had fun at Blackjack and Roulette.  When I wasn’t cheering her on, I was having fun with the Batman and Ghostbusters penny slots...I had some decent luck on them too. The only downside was the bar service.  They were severely understaffed and didn’t seem to move with much of a sense of urgency. This caused long waits for drinks. It didn’t help that they would only serve one drink per person. I couldn’t buy my wife a drink who was at a slot machine literally two feet from the bar area and in full view. While I understand their frustrations as they were slammed, one bartender was incredibly rude to my wife (ok, he was just an ass). However, a quick conversation with the apologetic manager smoothed things over. 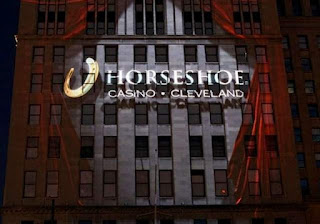 Sandwiched between stints in the casino was dinner at Hodge’s . Long story short, the food was amazing! We were excited to try their food ever since watching Chris Hodgson and his team on Great Food Truck Race on Food Network.  I had the “unfried chicken” and my wife had the ribeye steak, and we shared the gnudi.  Everything was perfectly cooked and just out of this world. Truly another restaurant gem in ! 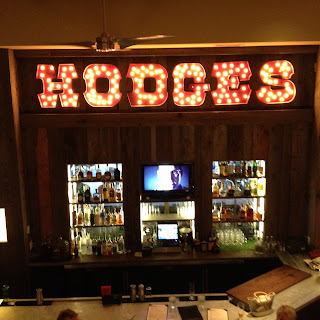