Stand up or Sit Down? Is There Even a Question?

First of all, let me apologize that this is my first blog post in quite a while.  With being incredibly busy at work, starting to volunteer with the Cleveland American Marketing Association and working on the launch of a second blog (details coming very soon!), my time has been very fragmented lately.  Anyway, enough excuses...I’m back and won’t be letting so much time lapse between posts going forward. 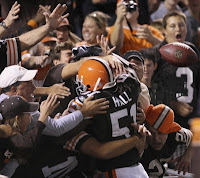 So, I’m sure most of you heard about what happened to Jim Becker at a recent Cleveland Browns pre-season game. It's pretty much an old story by now, but if you didn’t, in a nutshell, he and his wife and friends were kicked out of the game for having the audacity to stand up and cheer for the Browns when they scored a touchdown. Yeah, you read that right. Here’s the link to his story in his own words, and he tells it much better than me: http://www.chatsports.com/cleveland-browns/a/How-I-was-ejected-for-standing-in-the-Dawg-Pound-10-27-293. 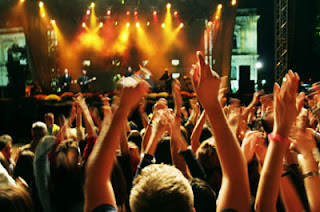 Now, I don’t know Jim, but his story just reminded me of all the times I’ve been asked to sit down when I’ve been at concerts or games, so I wanted to throw in my two cents. Nothing is more annoying than rocking out to one of your favorite bands live and someone yelling at you from behind asking you to sit down. I don’t want to be a jerk at a concert or a game, but I also want to enjoy myself. And, if that means I want to stand, then I’m going to stand.  I really don’t understand why someone pays (a lot of money!) for a ticket to a rock concert or a game and then expects everyone around them to sit because they don’t have the energy to stand for the couple of hours.  I can understand if you’re watching an orchestra or a tennis match, then it makes sense to sit down.  But a football game or a rock concert?  Sorry, I just can’t.  The way I see it is that I’m paying not only for the seat, but for the entire space that encompasses the seat.

All I can say, and I don’t mean it as mean as it sounds, but for those of you who want to sit at a concert or a game, do yourself a favor and stay home.  Save yourself the aggravation of having to ask all the people in front of you to sit, and us the aggravation of having to tell you “no”.  Watch the game on TV or listen to your favorite CD in your most comfortable chair at home. You’ll have much fewer aggravations and save a bunch of money in the process.

Again, this is just my opinion, but I’d love to hear from all of you out there.  Let me know, regardless of which side you’re on.  Thanks for reading!
Posted by Jeremy Bednarski at 8:31:00 PM