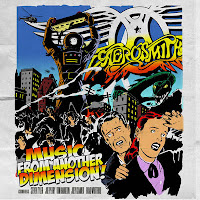 Rock and Roll Hall of Fame Inductees Aerosmith released their new CD “Music From Another Dimension” last week.  Would it be the “Same Old Song and Danc”e like their classic hit from Get Your Wings that true Aerosmith fans have been clamoring for? Or, would it be the same new song and dance that they’ve been trolling out in the 90’s, 2000’s and beyond?  They teased that it was a return to the Rocks and Toys in the Attic style and even brought back Jack Douglas to produce.  But, let’s just get this out the way to start: this is NOT a return to classic Aerosmith from the 70’s.  I figured as much when they started saying “there’s something on the CD for everyone”. That’s code for you’ll like a few songs and the rest are going to be crappy. 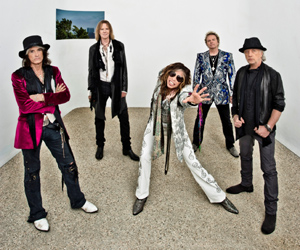 So, I’m reviewing the CD based on what it actually is without expectations of their 70’s sound.  Now, keep in mind, I don’t hate their music from the 80’s going forward.  Some of it I like a lot.  That’s what I grew up on.  But, it doesn’t compare with their music from the 70’s.  Every concert I’ve seen (and I’ve seen them more than 10 times) comes down to how many “old” and “new” songs they play.

First of all, the Good... Six songs out of the fifteen are probably their best original rock songs since their Nine Lives CD. They start out rocking with a loud, heavy riff for “Luv XXX”. It’s a nice way to kick off the CD.  “Out Go the Lights”, “Street Jesus” and “Lover Alot” are about as close as their going to get to old school Aerosmith, and these are the strongest songs on the CD. These three songs are going to sound amazing live.  Although, they come close to ruining “Out Go the Lights” with the most annoying back up singers causing major distractions throughout an excellent guitar solo, but more on that later. Joe Perry, as usual, shines on the songs he sings. You get two this time out with “Freedom Fighter” and “Something”. Now, the Bad...There are five ballads on this CD.  Five.  “What Could Have Been Love” and “We All Fall Down” (written by Diane Warren) are average, but sound nothing like Aerosmith. They could have been performed by any ballad-y type band.  Songs like “Angel” and “What It Takes” have that Aerosmith sound. These just sound like American Idol, paint-by-numbers ballads that don’t suit the band and sound more like a transition to a Steven Tyler solo album (which he says he’s doing next).  The other three ballads (“Tell Me”, “Closer” and “Another Last Goodbye”) at least sound like Aerosmith, but just aren’t very good. 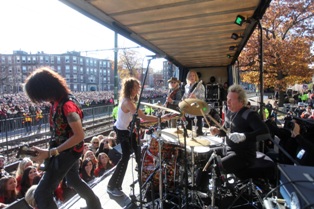 The duet with Carrie Underwood (“Can’t Stop Lovin’ You”) is one of the worst Aerosmith songs of all time. It’s just a lame pop song that is absolutely out of place. Unless you’re a huge Carrie Underwood fan, don’t even bother with this song. It’ll clearly be used to try to pull some country fans over and just more fodder for the American Idol fans. 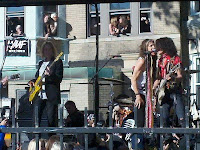 The most unnecessary and baffling parts of this CD (other than Carrie Underwood) are the backup singers and the many layers of orchestration and fluff.  Songs like “Oh Yeah” and “Out Go the Lights” would be much better without them having just the band sing back up.  Their strength is five guys playing live (six if you count unofficial member, Russ Irwin on keyboards and backing vocals). When they do that (see the good above), they’re golden. When they stray from that, it turns into a mess.

I blame mostly Jack Douglas as the producer.  He needs to be the one that strips them down and gets rid of crap like back up singers, and the layers upon layers of extras that are just not needed.  He was brought in to help get back to their old school sound and that is glaringly still missing here.  Even the good rock songs here sound overproduced. 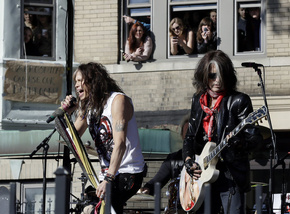 Overall, this CD is really a case of Dr. Jeckyll and Mr. Hyde. The good parts are really good and the bad parts are really bad. There are only a couple just average songs. There are rumblings that this may be the last Aerosmith CD. I hope that’s not the case because this isn’t what I would want them to go out on.  I keep going back to Slash’s Apocalyptic Love as the perfect example of the kind of hard rock CD that we all want to hear from Aerosmith.  I even Tweeted to the band when that CD came out to scrap Music From Another Dimension and start over if it didn’t sound like that. They didn’t listen (the nerve!). So, here’s to hoping they’ve got enough in them for at least one more CD...and one that goes back to the “Same Old Song and Dance”!

As always, these ramblings are just my opinion.  Let me know what you think of the CD.  Are you with me or liking what they’re putting out there?  Feel free to agree, argue or take it down a whole new path.  Thanks for reading!