AAF, AMA, Tweet Up - All in one day in Cleveland!

This past Wednesday through some cosmic scheduling forces, three worthwhile marketing events landed on the same day. So, as a test to my own mind and durability, I decided I was going to try to hit all of them. Why not? The worst that could happen would be to completely burn myself out in one day on marketing knowledge...wouldn’t be the first time. Oh, and I had to work that day too.

First up was the Cleveland American Advertising Federation luncheon – North by Northeast (NXNE): An Inside Look at SXSW 2013 From Artists and Professionals. I’ve never been to the SXSW (South by Southwest) conference in , but would love the opportunity to go. Started as a music conference, it has grown to include interactive marketing. The panel began with Mike Knowlton of Basik on Skype. Unfortunately, the majority of his presentation was marred by issues with Skype. The biggest takeaway from his part was that Big Data was a hot topic. He also shared that while storytelling is important for brands, it’s not easy to do. An interactive storytelling app called Zeega can help with that.  Also, the Leap Controller app is going to bring “Minority Report” to life by allowing us to control the Internet through hand motions.

Next, Markus Vogl and Margarita Benitez went through their takeaways...a lot of which were tablet and mobile capabilities through things we’ll be able to wear. Google glasses were a common theme that came up throughout all the presentations. Finally, Chad Milburn of Recess Creative and part of the team that created the new Plotter app, walked us through his weekend as the Plotter team made their presentations and one awards and grants for the Plotter app. The idea for the Plotter app actually came from the 2012 SXSW conference as they were looking for recommendations of things to do in . If you haven’t downloaded the app yet, I highly recommend it. 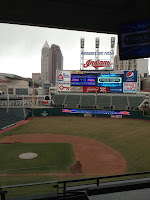 The next event of the day was a Cleveland.com Tweet Up at Progressive Field. If you’re unfamiliar, a Tweet Up allows Twitter users to get together and meet and talk in person. Cleveland.com has put on several Tweet Ups and usually centers them around some theme. This one was centered around the Cleveland Indians. Bob DiBiasio, Senior VP of Public Affairs, went through all of the changes and additions for the Cleveland Indians this year. This included new players, changes for their season ticket holders and even their lowering of some concession prices (read beer and hot dogs...Thanks, Indians!). I couldn’t stay long, but also got to catch up with a couple of friends.

Finally, the final stop of the day was the Cleveland American Marketing Association event, What’s Your Sway Factor? Learn the Art of Intentional Social Networking for Career Success with Sima Dahl, President of Parlay Communications. Her presentation was a guide on how to use LinkedIn to maximize your online presence and build your personal brand. She showed us how to build our own brand keywords and to create a profile that allows us to be found for what we want to be known for. One specific key piece of advice: Google yourself and save it as a Google Alert. As a volunteer for the AMA, I’ve been to most of their events in the last year and I can say that her presentation was one of the best and most inspirational we’ve had.

Overall, it was a busy and hectic day, but one that I’d do over again in a heartbeat...and there was no burnout! I’m sure I’m barely scratching the surface in what everyone took away from each of these events. I’d love to hear from all of you that were at any of these events with what you took away from them. Feel free to comment below.  Don’t forget to sign up to receive my updates by email.  As always, thanks for reading!