Bon Jovi - What About Now...for a Party in Cleveland! 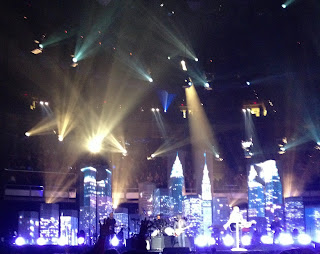 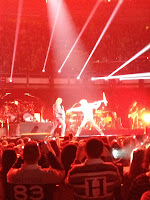 Anybody who’s been to a Bon Jovi concert already had a pretty good idea of what they were in for.  I’ve seen them every time they’ve come to Cleveland since 1993, plus a couple of Columbus shows. Add that it was a Saturday night and you knew we were in for a hell of a party! A nice perk this time around was that there was no opener. Simply put, they don’t need one. Jon Bon Jovi was this party’s host kicking off the night with “You Give Love a Bad Name”. Three hours and 27 songs later, the crowd was led through an over 30-year journey of songs from one of the hardest working bands still around.

Jon’s voice continues to be in top form and his ability to engage the crowd of over twenty thousand to make us feel like we’re in a small, intimate club only seems to get better with age.  Richie Sambora, one of the most underrated guitarists of all time (in my opinion), shined throughout the night in solo after solo. The rest of the band supplied plenty of back up each getting some time of their own to shine…even Bobby Bandiera got a couple of solos. 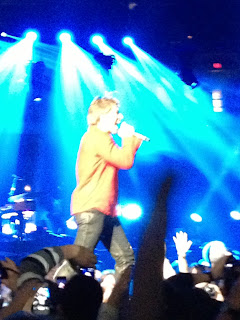 One of the biggest highlights was a platform that came out to the crowd, roughly 4 rows from my seat, where Jon came out to sing a couple of songs (Amen and Bed of Roses). He then called out Sambora to meet him while they played “I’ll Be There For You”. Another highlight was during the 3rd encore (yes, 3rd!), they had the skyline behind them as they play “I Love This Town”. Jon always mentions WMMS and Kid Leo in helping to break the band by playing “Runaway”. It’s a nice touch that shows how much he appreciates and our support. He also told the story of the workers in that lost their jobs and were the inspiration for “Work for the Working Man” (which we’ll likely have to hear every tour from now on…not one of my favorites). 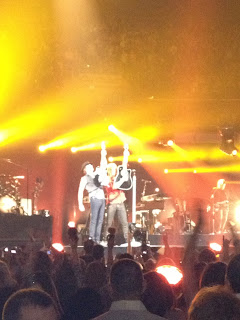 The only negative of the show was probably the setlist. The majority of the 27 song setlist was their newer songs…including four from their new CD, What About Now (I’ll be posting a review soon). The newer songs are ok, but it’s the older stuff most of us want to hear. One glaring miss was that Sambora didn’t sing a song like on most recent tours. With his new solo CD that came out last year (which is very good, by the way), I thought for sure he would get a chance to do one of his songs.  Overall though, they were able to cover enough of their history that everyone was happy. And, let’s face it, they could go out and sing the ABC’s for three hours and everyone would love it!


My favorite songs of the night were “I’ll Be There for You”, “Raise Your Hands” and “Keep the Faith”.  I can’t wait for them to come back again…hopefully soon.  If you were there, tell me what your favorite was! Or, if you weren’t, just tell me your favorite song, video, whatever…I’d just like to hear what you think.  As always, thanks for reading! 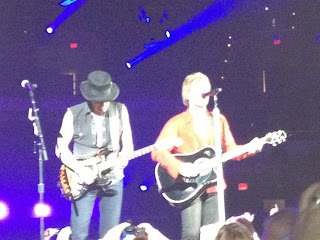 Set List:
You Give Love a Bad Name
Raise Your Hands
Lost Highway
Because We Can
That's What the Water Made Me
It's My Life
Someday I'll Be Saturday Night
What About Now
Work for the Working Man
We Got It Going On
Keep the Faith
Amen
Bed of Roses
I'll Be There for You
Runaway
We Weren't Born to Follow
I'll Sleep When I'm Dead
Wanted Dead or Alive
Who Says You Can't Go Home
Bad Medicine

First Encore:
You Wanna Make a Memory
In These Arms
Born To Be My Baby

Second Encore:
Have a Nice Day
Livin' on a Prayer 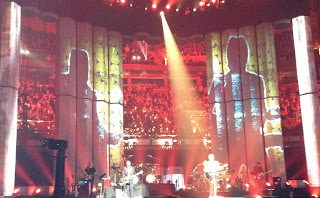