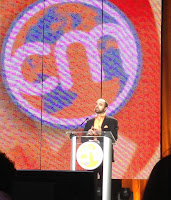 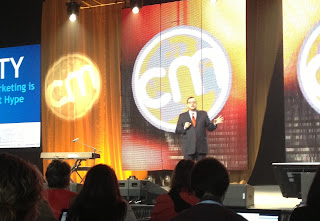 This was my first time attending. I’d been told by friends how good this conference is and had high expectations. It met every expectation and even exceeded them. I’ve been lucky enough to talk to Joe quite a few times both through social media and in person. Based on what I already knew from those conversations, I wasn’t surprised in the least that he would exceed expectations. It’s just the enthusiasm that he exudes for content marketing. For this recap, I’m going to focus on a few of the keynote speakers he brought in. Don’t take that to mean the breakout sessions weren’t also excellent. The ones I attended, with well known speakers like Ann Handley, Lee Odden, Joe Chernov, Marcus Sheridan, Jeff Rohrs and so many more than I could list here, all brought a ton of expertise and insight.


Joe started off the first morning with a video that showed him running through downtown Cleveland to the Convention Center leading him to the stage (in his traditional orange suit...complete with orange shoes!) to welcome us and give us the state of content marketing today. He then welcomed Jay Baer to the stage. Jay’s presentation was based off of his current book, Youtility: Why Smart Marketing is About Help Not Hype. I won’t go into too much detail as I’ve written a review of the book (http://www.jeremybednarski.com/2013/08/book-review-youtility-by-jay-baer.html). Youtility is marketing that is so useful that customers would gladly pay for it. What he gave us were plenty of real company examples of companies using content marketing to be useful and helpful instead of using it to promote their products. What I love about the concept is that it makes so much sense. There are so many applications of this concept that can easily be implemented by companies of any size. It just requires a slight shift in strategic thinking. Instead of thinking me first, think about what your customer needs and how you can meet those needs. 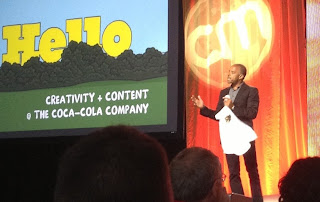 Jonathan Mildenhall from Coca-Cola completely blew us away with his presentation of Coca-Cola’s transition and growth through liquid storytelling. In fact, I tweeted the following: “Not tweeting as much during the Coca-Cola .@mildenhall keynote because it's just fascinating!” Explaining that amazing things can happen when you listen to consumers, Coca-Cola made a case for change and grew from one way storytelling to dynamic storytelling, including building in social purpose. He showed examples of how they modernized the old “Share a Coke” song/commercial in Australia by allowing consumers to customize cans with recipients names...taking the sharing concept to a new level. He also worked on a campaign between Africa and with a Coke machine that had a camera so consumers in Africa could see those in and vice versa. The machine would tell them to do things like dance and even had a place where they could simultaneously place their hands.
He talked about having the ability to fail and of one of his failures (costing hundreds of thousands of dollars). However, that failure led to a dynamic online campaign in which they created an elaborate graphic novel on their website where visitors could choose the adventures the characters took. This brought home one of the key themes of the conference: creating brave and challenging content. He acknowledged that while most of us don’t have the luxury of the Coke’s budgets, we all must be allowed to take risks and fail. Companies that don’t have the opportunity to fail, don’t have the opportunity to grow. Overall, Mildenhall, I think, represents what most of us in that room wish we were able to do. I came away inspired to be more creative and to think bigger. The hard part will be to harness that inspiration into ideas that are realistic and applicable to my job. 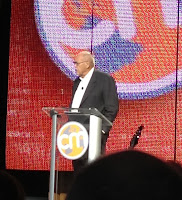 Wednesday’s keynotes began with Don E. Schultz from . This may have been the most thought provoking session of the conference. He showed evidence that brand preference has been declining each year for the past decade. Additionally, that decline is directly correlated to the increased use of social media, coinciding with the decreased use of traditional mass media. As Schultz put it, social media creates communities, not markets. Social media and other digital marketing tactics are great tools, but they have to be incorporated into the overall marketing plan. In looking at what influences people’s buying, the top influencer is word of mouth, followed by the traditional media: TV, radio, newspaper, etc. Internet finally shows up a bit further down the list. Content marketing will get us back on track as we go back to true storytelling and taking the time to understand what solutions and information customers need. 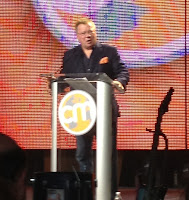 Finally, the closing keynote...none other than William Shatner! So what does he have to do with content marketing? Quite a lot actually. He talked about many of his current and soon-to-be released projects. He’s got an upcoming music CD, a new show about wine, a partnership with watchmakers, a new show about motorcycles...he’s a busy guy at age 82! But what ties all of these projects together are the stories about each of them told from his perspective. With each of them, you can see his genuine enthusiasm. When asked about self-promotion, he said he sees it as simply working on projects that he’s truly interested in. This to him wasn’t self promotion, but simply enjoyment. In a subsequent interview with WKYC, he said he understood a while ago the impact of marketing to people in ways where they don’t realize they’re being marketed to. 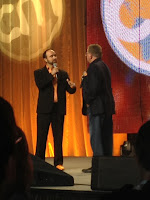 So, there you have it...two jam packed days in a nutshell. I’m sure everyone in attendance took away many of these messages, as well as many others. The inspiration that comes from being at a conference like this can’t be replicated in a blog, webinar, podcast or live stream. should be very proud of Joe Pulizzi for making this happen in our city. For those that haven’t attended yet, I can’t recommend it more. I can’t wait until next year’s conference and I hope to see many more people – both local and new to !

For those of you that were there (or have attended in the past), I’d love to hear your thoughts and what you took away from the conference. Please share it below! As always, thanks for reading and please share with your friends if you like my blog and sign up for the emails!
Posted by Jeremy Bednarski at 6:02:00 PM