The Best Decision I've Made This Year: A Recap of Content Marketing World 2014

Last year about this time, I was doing what I'm doing right now. I was thinking back on my experience at Content Marketing World 2013 and trying to encapsulate just how awesome it was (you can read my recap of the 2013 event here). It was my first time going and all I knew was that I couldn't wait until the next one. So much so, I put it on my 2014 goals at my work. Well, they didn't cooperate the way I was hoping. I was denied!
I quickly got over my disappointment as I realized that I had another option: I could go on my own. It didn't take long for me to make up my mind. I got my wife's blessing (there are a lot of things we could have done with that money...) and quickly went ahead with my registration. I couldn't pass up learning from so many great marketers that would be descending upon , my hometown! Not to mention, seeing all the Tweeting during the event would have driven me nuts if I wasn't there! 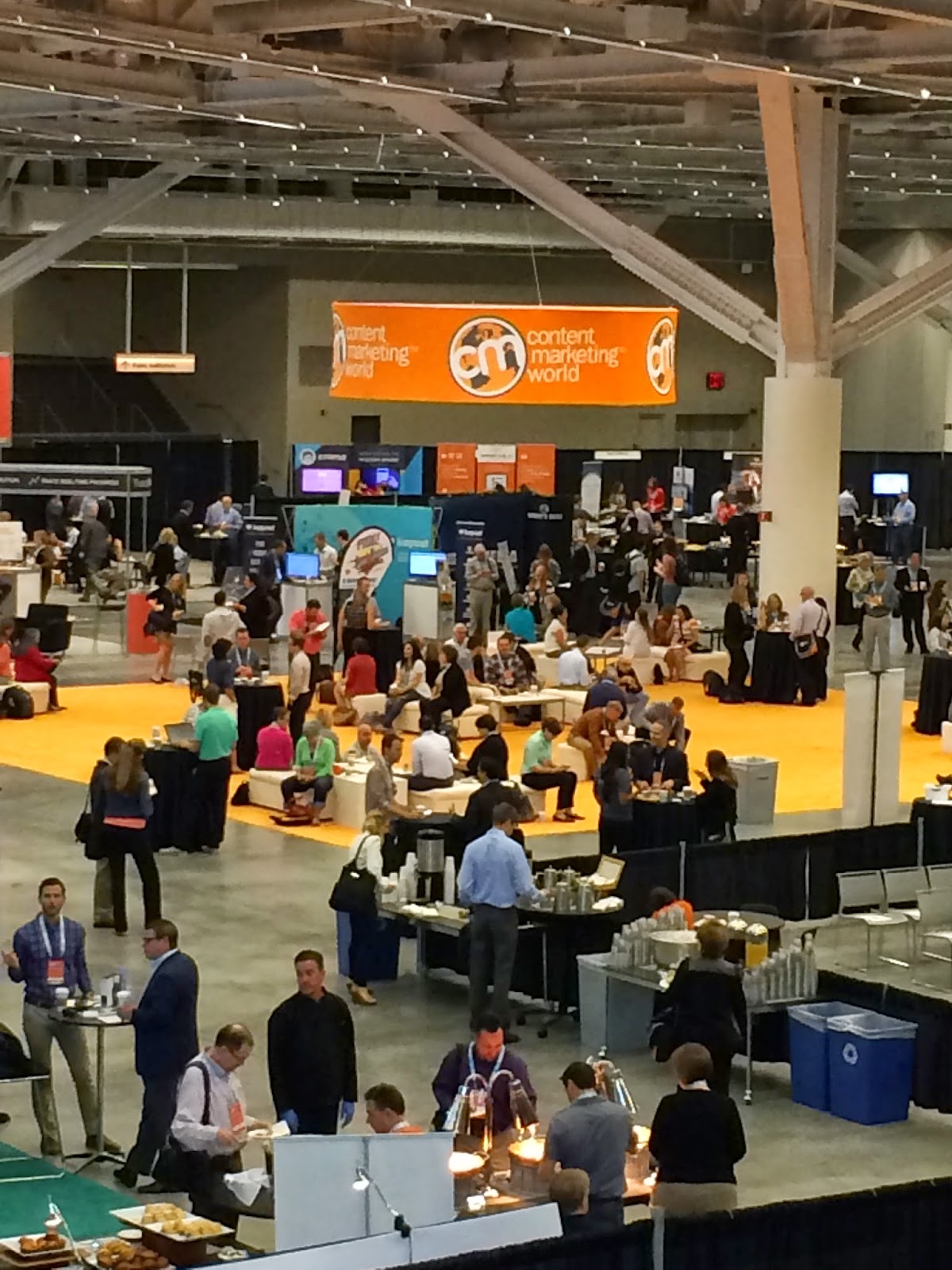 It was clear how much the conference has grown as you stepped into the Expo Hall. It all seemed bigger. There were many more exhibitors and in a bigger space. It really had a nice feel to it. There were a lot of common spaces where I ran into quite a few friends. I even noticed the expanded exhibit hall for the keynote addresses. It was bigger, but not overwhelming. 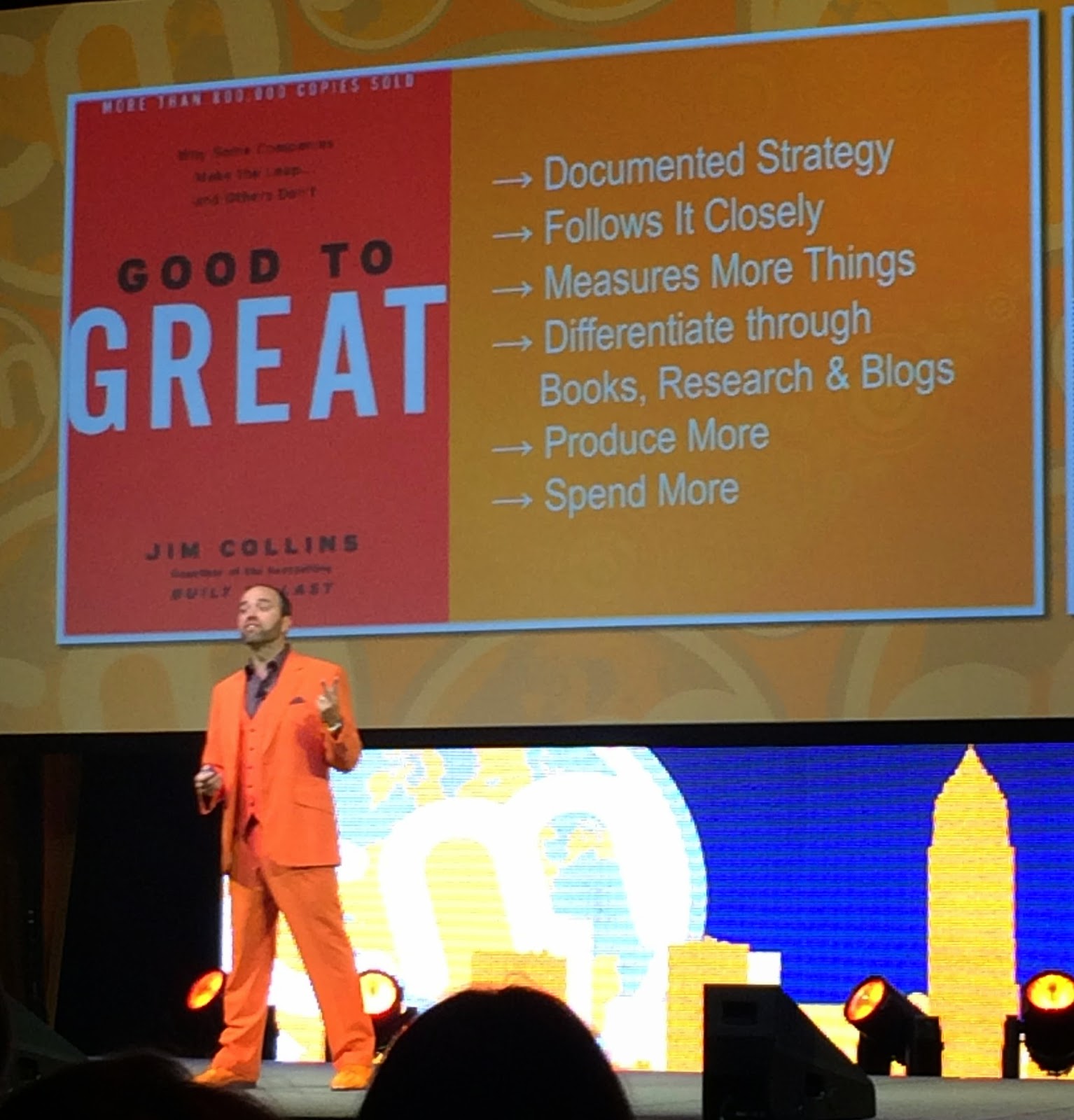 Joe Pulizzi, in all his orangeness, kicked off the conference with a video explaining what to expect from the conference. It of course featured his closet of orange suits, his orange journal and lots of close-ups of him eating ribs (I can’t unsee that!). It was clear that this was not going to be a repeat of last year's message. The "Beyond Storytelling" tagline reflected the growth of content marketing over the past year. As last year focused on telling the story, this year was all about taking your stories to the next level and making them work harder for you. Strategy was a common theme throughout the conference and it began with Pulizzi explaining that successful content marketers focus first and foremost on documenting their strategy. This was the biggest aspect (but not the only - see the photo above) that separated those that are effective.
The keynote speakers each had a different take on how we can market smarter and better. Andrew Davis, author of Brandscaping and last year's highest rated speaker, asked if we were Ptolomy or Galileo. Do we believe that our website is the center of the Internet universe? Or do we understand that we're just a small blip revolving around the big sites (read Google) and how do we get closer? His "Moment of Inspiration" (MOI) is when we start our search for something. He used meatloaf to take us through his entertaining journey to show us the thought process and path that our customers go through until they reach the moment of purchase. Most companies are good right before the purchase stage, but the MOI is the biggest opportunity for us to send our customers on a journey. We can do that by telling stories that drive revenue.  MOI leads to ROI. He used examples like Disney that created the Nemo Effect with Finding Nemo. So many kids wanted clown fish after seeing the movie that it created a shortage.
Julie Fleischer, Data+Content+Media Director for Kraft Foods, took us through Kraft's evolution from "generic, lowest common denominator" marketing to "personalized, unique, smarter" marketing. They are creating memorable content across all devices that their customer relate to measuring their success. They've used their data to test, learn and improve their ROI.  She also said what might be my favorite quote from the conference: "Learn Fast and Break Things!" 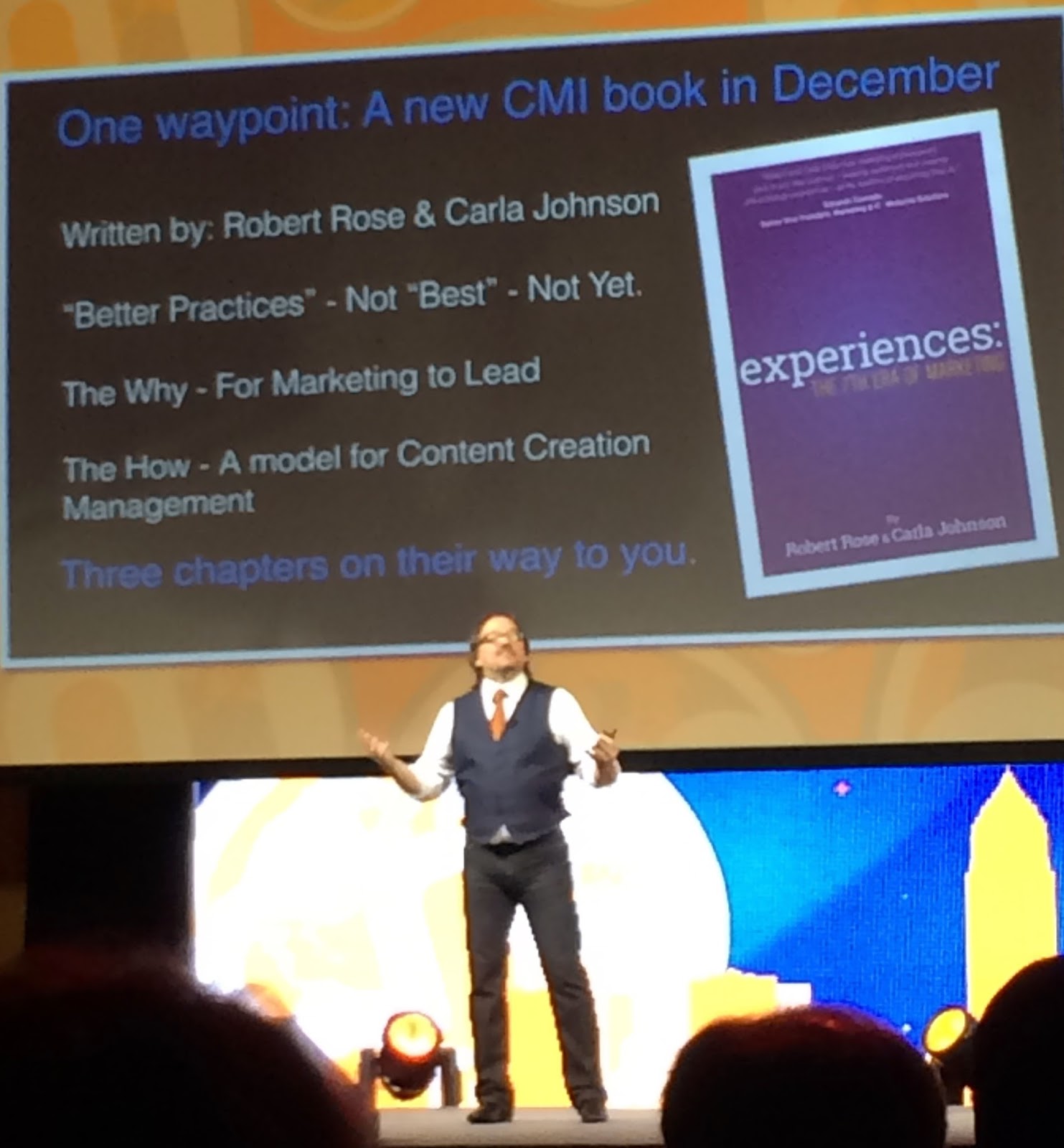 Robert Rose's inspirational presentation told us what's next for marketing. Quite simply, WE are what's next as we move into the Experiences era of marketing. Marketers need to take the lead on providing valuable experiences. Customers no longer have a guided journey to make purchases. You could almost hear the choir singing in the background as he called upon us to change marketing and lead our organizations instead of being the subservient support group. His book which will cover this topic more in depth comes out later this year and will shoot quickly to the top of my must-read list.

That led right into Scott Stratten exploding onto stage to Rush because, as he explained, he's Canadian! He then went on 30 minute tirade of the things that drive him crazy with content marketing and what we should (and shouldn't) be doing. This included rants on how Delta diffused his anger after rude treatment, bad newsletters, vanity metrics, marketers that exploit tragedies for their social media or blog posts and automated posts (which he compared to sending a mannequin to a networking event). The highlight was his demonstration of the lack of logic in using QR Codes in emails. I don't know how I've not heard him speak before now, but he's easily one of my new favorites. 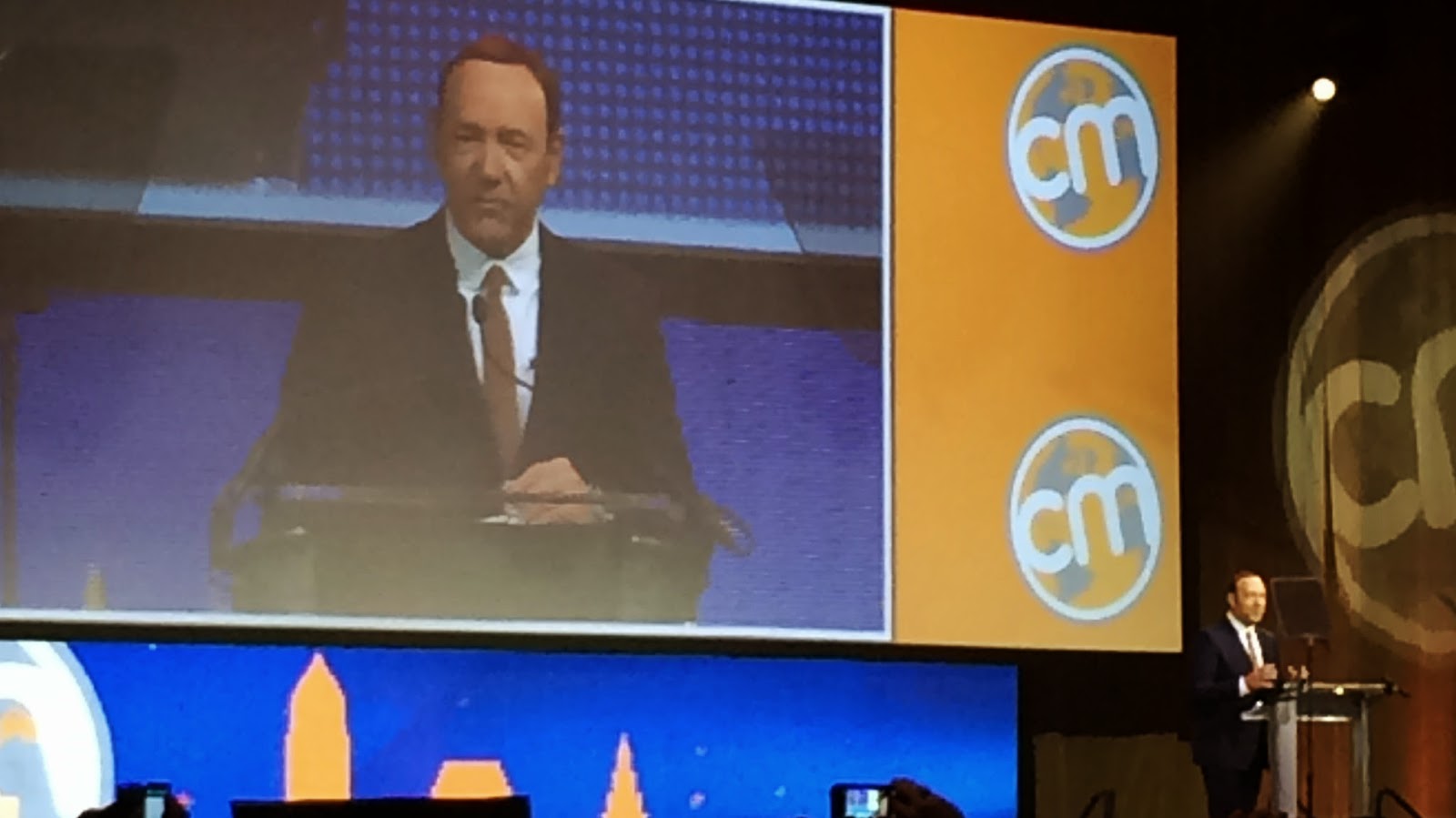 Kevin Spacey was the headliner for this year's event (right after Joe of course). After talking about the sales funnel, ROI and a few other buzzwords, he said, "That's right. I know your f---ing terms!" He then went on to explain the phone call he received from Joe asking him to speak at the event, using a Joe Pesci voice to mimic Pulizzi. That led to his impression of William Shatner at last year's event. When he got serious (with a few quotes from House of Cards's Frank Underwood thrown in from time to time), he talked about the Story. The three keys to great story telling are conflict, authenticity and audience. Finally, he talked about his decision to take House of Cards to Netflix. He gets that the audience doesn't care about the platform. They care about the content. Customers should be able to get content how they want it, when they want and where they want it. 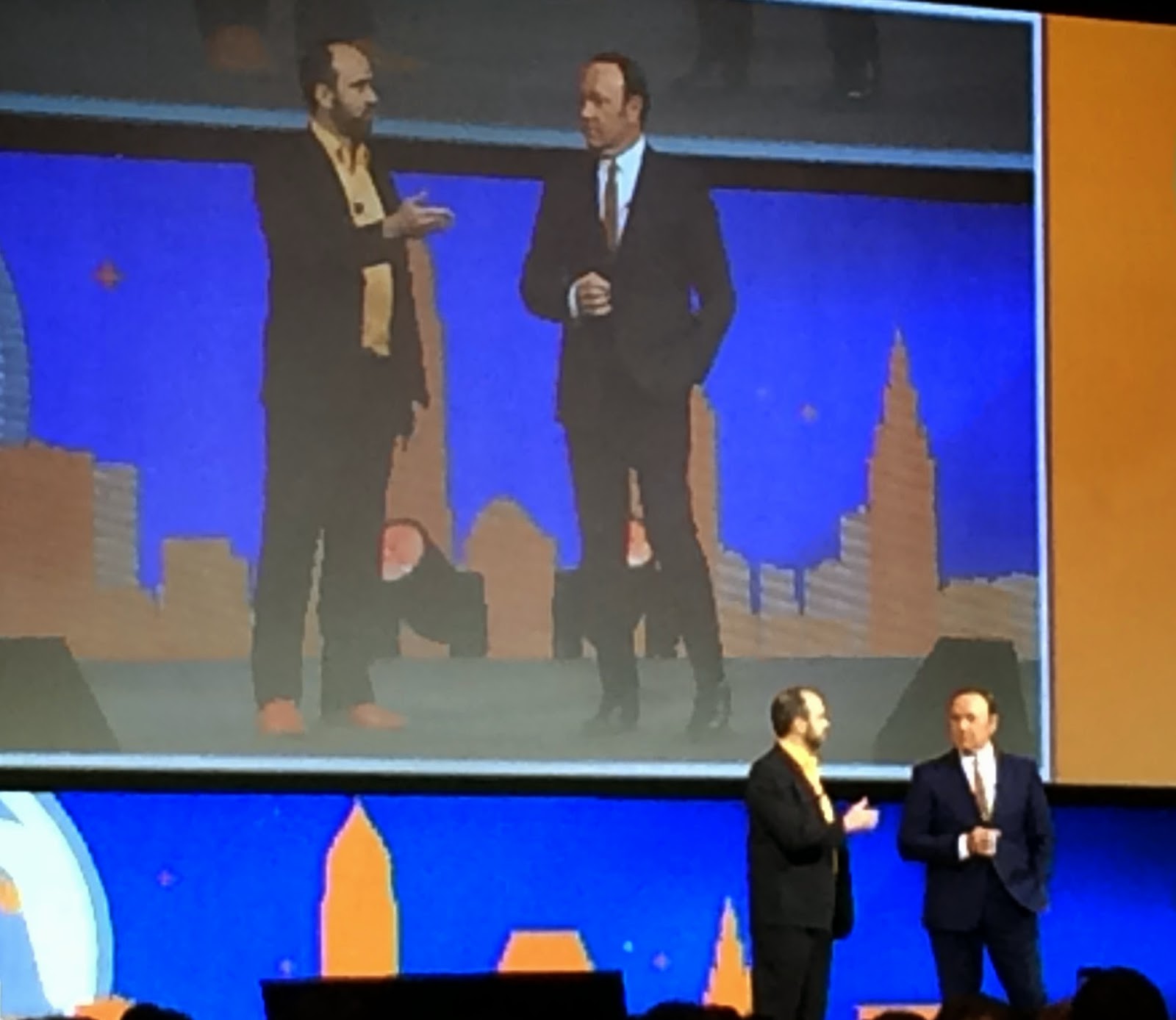 Here's a quick rundown of a few more highlights and takeaways: 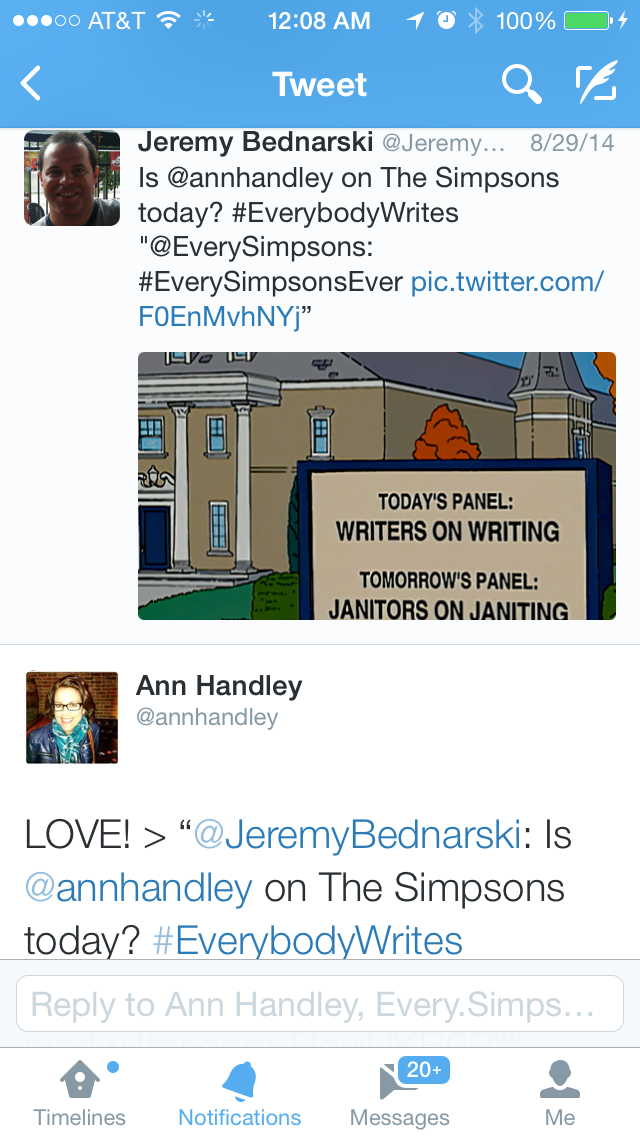 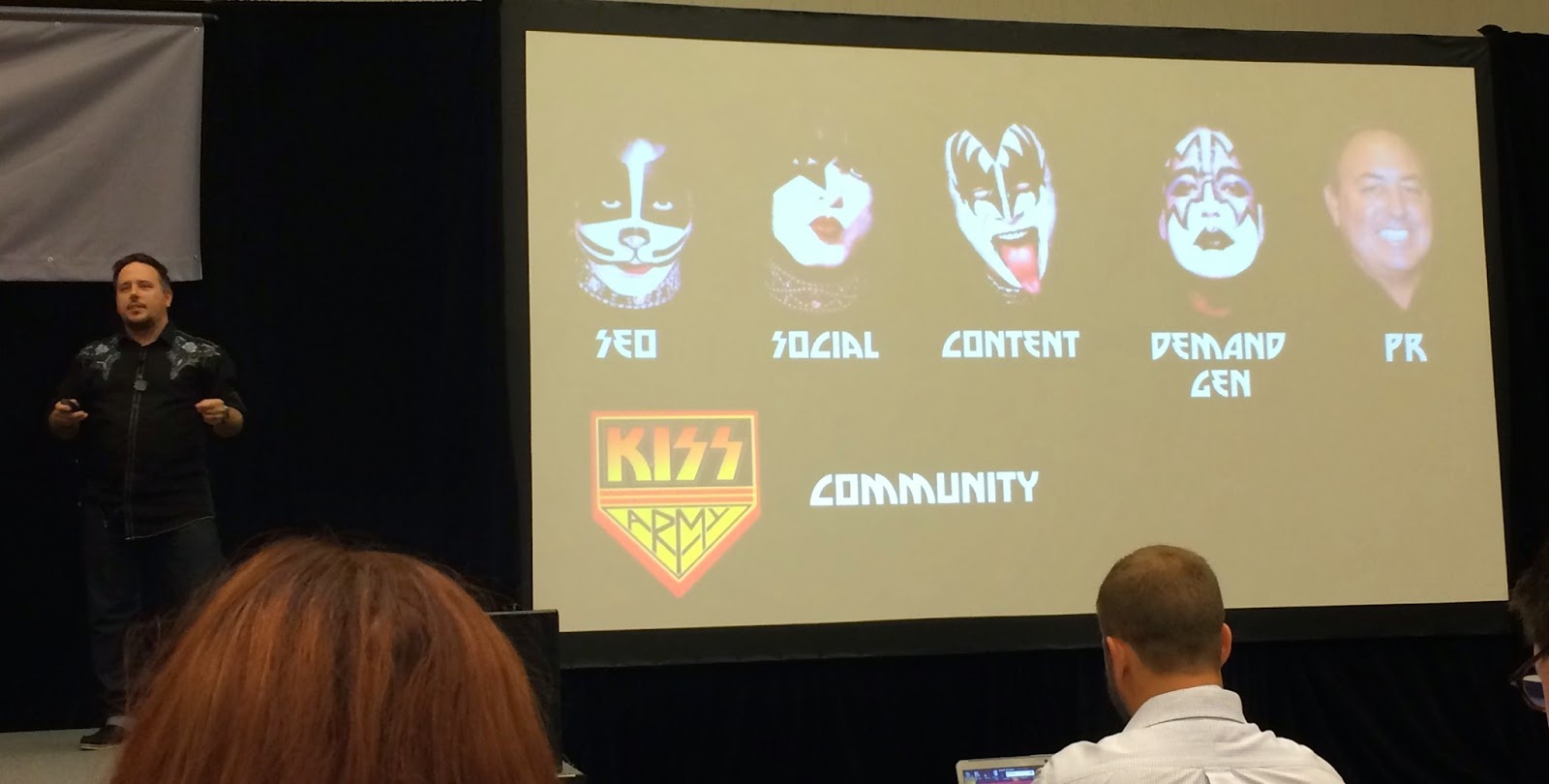 
If you attended, or even if you just followed #CMWorld, I'd love to hear your thoughts on the show and what you thought were the biggest takeways. As always, thanks for reading and please share this post with your friends!