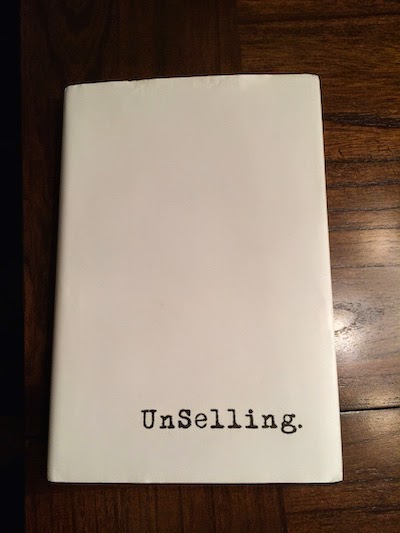 Is there anything we dread more than the car buying experience? What makes it awful is that most of us feel like we’re at a disadvantage. We never feel like we have all the information, and we usually don’t. Car salespeople know this and use it to their advantage.

If a car dealership would be transparent, they could be hugely successful. Instead of preying on our insecurities, ease our tension and make us feel confident about our decision before and after the sale.

Unselling by Scott Stratten (@unmarketing) and Alison Kramer (@unalison) is about creating repeat customers instead of one-time buyers. They talk about the relationship between a brand and its customers as the “pulse” and customer experience is tracked on the “pulse line”.

The pulse line travels through three sections depending on our experience:
Each experience leads to a “pulse point”. According to Stratten and Kramer, there is no neutral experience, so the points are always moving up or down. These can be personal experiences (such as your interactions with the brand’s products or service) or broad actions taken by the brand that affect everybody (such as a price increase or bad publicity based off of something they say or do).

My Car Buying Pulse Line
To illustrate, I’m going to use the “pulse” as I describe my car buying experience from the last couple of weeks. I had bought two cars at Metro Toyota (one of our local Toyota dealerships) and always had a good experience. So, going in, I was starting out pretty high in the Static area.

I test drove the car and then talked to the salesman. He worked out the total cost, including the trade-in value from my current car. He simply asked me if I had looked up the value of the car. I told him Kelly Blue Book had the value at $2700 for fair condition. He put that number into the price he was quoting (without even looking at the car).

He even offered to give an additional $500 on the trade-in value to bring it to $3200 (still without looking at the car) to buy it that day. I didn’t intend to buy that day as I was just starting to look, but was tempted.  He said the current promotions were good through Monday (it was Saturday), so I left with the numbers he wrote down.

I went through the numbers closely at home and was satisfied that the price was pretty good. So I called back with, admittedly, an aggressive counter offer. I wasn’t surprised when he said that it was too low. However, he said he might be able to work a little more on the trade-in value, so I told I’d come back on Monday so they could examine my car.

At this point, my pulse point had gone up in the Ecstatic area. The visit was short and easy, and I had hard numbers to work with. I was ready to buy and had every intention of doing so come that Monday. I should have known better.

On Monday, after looking at my car, he said he could only give me $1000 for the trade-in…maybe $1500. I was not expecting that. He said that I had told him the car was in good condition and it’s wasn’t. Not only was he undercutting the offer he already made by $2200, he blamed it on to me as if I had lied to him.  My pulse point plummeted to the Vulnerable area as I left without buying the car.

Don’t get me wrong. His explanation of the value of my car was valid. If he had looked at my car before putting the Kelly Blue Book value (and then offering an additional $500) into his quote, I wouldn’t have been upset. This just felt like a standard rope-in tactic to get you to spend more. Even friends said it sounded like a bait-and-switch.

I hated the idea of starting the whole process over. So, I decided to Tweet the experience to see if I got any response (Social media is a great place to get some help. I wrote about that here). Here was my Tweet:

To their credit, Metro Toyota’s sales manager, Rich, called me about an hour after the Tweet. They also replied to my Tweet shortly after that apologizing for my experience. They even named the salesman which show me that they looked up my information to be familiar with the situation. That moved my pulse point back up…a little. Reaching out was positive, but I didn’t know what they would offer me.

Long story short, when I called Rich, he apologized and, while he couldn’t give me the original quote for my trade-in, he was able to make a good offer. We were able to agree on a deal that I was comfortable with and I ended up buying the car…happily.

A shout out also needs to be made to Tony who took care of me when I went back to finalize everything. He was actually the one that replied to my Tweet and was very friendly and treated me like a person and not a disgruntled customer.

My pulse point is now back up to Ecstatic. I would absolutely recommend Metro Toyota (with the caveat of having them look at your trade-in car before believing any offer they make). They were able to save my business by paying attention to social media, reaching out and regaining my trust. One last note: at the time of my Tweet, I would have listened to any of their competitors, but no one else responded to my Tweet. I had visited a Nissan dealership after my initial visit with Metro Toyota. I couldn’t get them to even talk about price. All I got was a vague “we’ll work with you” and I felt like I was wasting their time. Had I felt comfortable with them, they would have been the first place I went after Metro Toyota fell through. Instead, they weren’t even a consideration.

The Pulse is a great way for brands to understand customer experiences and how it affects their loyalty or buying behavior. Do you have an example of how this might apply to one of your buying experiences or, if you work for a brand, how you can work this into your marketing strategy. Thanks for reading and please share this with your friends.
Posted by Jeremy Bednarski at 11:38:00 PM